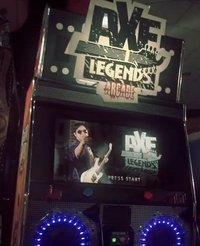 Axe Legends, styled as AXE Legends, is a video-game in Video Game High School, resembling real-life video games Guitar Hero and Rocksmith. There is the full game and an arcade version. It can be assumed that Freddie Wong created the game or helped take part in creating the game, since he is featured in the arcade version and the first difficulty level is named after his own son, as no one else would know if Ted was bad at the game or not. The game can be seen throughout the series being played by Ted Wong and is the main game used in the class Rhythm Method.

The difficulty levels can be seen in Episode 4 as Ted is playing the full game. The fact that the first difficulty is named "Ted" foreshadows that Ted Wong is bad at the game.

An arcade version of AXE Legends is seen in Episode 8 in Brian's. Ted goes to play it after Ki arrives at the table, who he is still angry at for signing him up for Drift Racing. The game is also seen after Fred Ted's dad died in season 3. He beats it at the end then, at the end He says "You don't know how many times i beat this to hear him say that."

There are most likely more songs after (as well as before), but are not shown.

Retrieved from "https://vghs.fandom.com/wiki/Axe_Legends?oldid=12660"
Community content is available under CC-BY-SA unless otherwise noted.